Market Summary The first half of the year is one that most would like to forget, with key equity indices, namely, the S&P 500 and NASDAQ finishing the half down ~20% and ~30% respectively. The bulk of the negative moves were experienced in the second quarter of the year, though we have seen a modest […]

The first half of the year is one that most would like to forget, with key equity indices, namely, the S&P 500 and NASDAQ finishing the half down ~20% and ~30% respectively. The bulk of the negative moves were experienced in the second quarter of the year, though we have seen a modest recovery in the third quarter to date.

In our last commentary, we highlighted the strong action by the Fed (the US central bank), with their 75bp rate hike representing the largest in almost three decades. Not to be outdone, the Great White North attempted to burnish its own inflation fighting credentials, with a 100bp (1%) increase by the Bank of Canada.

After being behind the curve for much of 2022, these two significant rate moves, highlight to us, the degree to which the Fed and Bank of Canada have internalized the magnitude of issues they face, and importantly, the strong action required to address them.

Accompanying the hike were comments by Bank of Canada Governor Tiff Macklem, who the writer has been fortunate enough to have a few interactions with during his years at Rotman where he (Gov Macklem, not the writer!) served as the Dean, messaging that more aggressive actions now tends to lead to more favourable outcomes later, i.e. the soft landing that central bankers are trying to engineer.

“By front-loading interest rate increases now, we are trying to avoid the need for even higher interest rates down the road. Front-loaded tightening cycles tend to be followed by softer landings. This argues for getting our policy rate quickly to the top end or slightly above the neutral range.” (Source: Bank of Canada statement following the release of the Monetary Policy Report, see link for full statement)

Inflation – its time to start to (somewhat) shift focus

These two data points, at first glance, may seem at odds with the commentary that follows, but its important to make the distinction between what has happened, and what will happen (or more accurately, what our best estimation is for what will happen).

Forecasting is a generally humbling experience, but financial markets look forward, and we need to do the same. Ironically, forecasting from an individual security investment perspective largely isn’t the most productive use of time. Effort is better spent finding an investment opportunity that has highly favourable risk-reward (i.e. a favourable outcome if one is correct, and a still favourable, though less so, outcome if one is incorrect, i.e. a win-win), vs. getting an estimate on some macroeconomic figure accurate to the 1/10th of a percent.

That caveat established, sans any further significant supply-side shocks, it appears we are likely, at, or near the peak in terms of inflation in this cycle.

This is due to relief on the supply-side (key input prices, namely oil and commodities, have moderated somewhat, while shipping prices continue to retreat), and net-net, we are likely starting to see the impact (dragging down) on demand from rate hikes.

Whilst this assessment may bring comfort to some, it is important to note that, if this view (that inflation is peaking) is correct, that only represents the first battle.  The current fight (read challenge) facing central bankers is how quickly inflation can be reined in and brought back down to target levels, and how great the cost required to do so, i.e. how much economic growth will be negatively impacted. 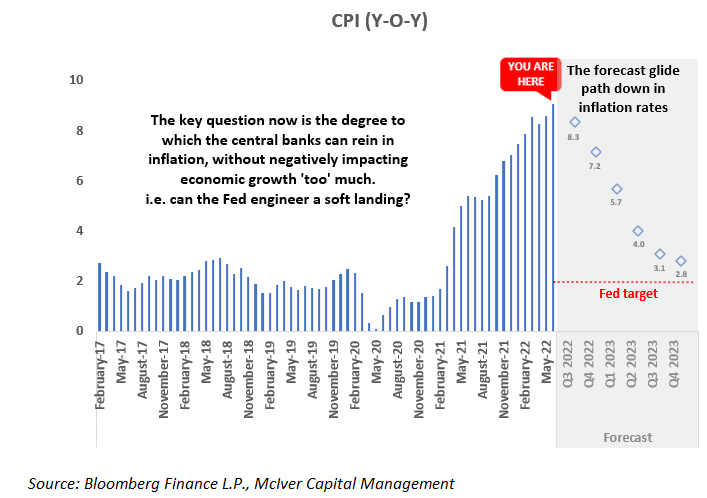 Currently, we think it appropriate to classify the outlook for inflation into three broad scenarios, namely:

1. persistent elevated high levels of inflation circa the 1970s,
2. a moderation in inflation, but to levels that remain stubbornly above target (i.e. inflation levels are structurally higher), and
3. inflation returning to target levels over the short to medium term (i.e. elevated levels, inflation was ‘transitory’ all along).

Firstly, and fortunately, the first scenario at this stage seems highly unlikely absent further significant supply shocks (the oil market was subject to two significant price shocks in the 70’s, resulting in a ~10x increase in prices) and major policy errors. See this link for a concise summation on this issue from the Atlanta Fed.

The latter two scenarios are the ones we believe market participants are beginning to circle the wagons around. In line with this view, the 2.8% consensus expectations for inflation in Q4 2023, falls in between a scenario 2 (structural inflation) implied rate of 4-5% and the 2% target rate implied by scenario 3 (inflation is ‘transitory’), with some bias towards the more dovish scenario. It is worth noting the market’s general uncertainty around the expected inflation glide path, with a wide range of economists estimates (the range of estimates for Q4 2023 are 1.6%-5.0%, excluding outliers). 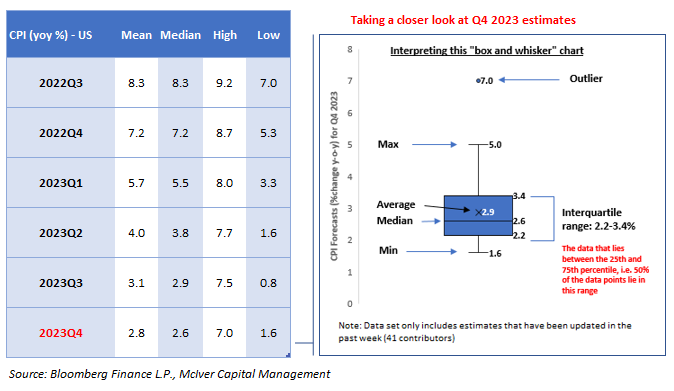 Regarding the expected moderation in inflation, our concern remains two-fold, that the market could be too dovish (inflation is ‘sticky’) and, even if the central banks can engineer a ‘good’ inflation outcome, it may come at the cost of too much economic damage.

A pyrrhic victory of winning the inflation battle but losing the economic war.

At the risk of repetition, as we did previously (in both “Market Forces 001” and “Market Forces 006 ”), we continue to flag the services component of inflation as being a key data point to focus on in terms of assessing the degree to which inflation is becoming entrenched.

We note that inflation in the services component continues to accelerate, and also highlight the recent material increase in hourly wage costs that are now increasing by ~7% (versus a 25-year average of ~4%).

This is an example of the risks of structural inflation; consumers (who are also employees) face higher costs of living due to inflation, they then demand higher wages, which companies pass on to consumers in terms of higher prices, and so on, and so on.

This is an example of a positive feedback loop and what George Soros would refer to as reflexivity. This also explains why it is also so important to the central banks that the actions they take are perceived to be credible; they need to break the psychology of higher prices before they become truly entrenched.

The ‘other’ impact of interest rate increases

As we alluded to earlier, the difficultly in controlling inflation is that the tool to do so (increasing interest rates) dampens overall economic demand, at the same time as consumer wallets are pressured by price increases.

We have already seen consumer sentiment impacted significantly and believe the lagged impact of the rate increases seen to date will begin to negatively impact consumer expenditure, economic growth, and unemployment data.

This leads us to believe that in this next phase of the current inflation/rates reset process markets are undergoing, that earnings expectations which have been largely unscathed to date are likely the next domino to fall.

For those followers of mean-reversion, it is also worth nothing that corporate profitability is at, or near, multi-decade highs.

Upon reflection of the past six months, the tone of these notes has not been one would describe as cheery. In and of itself, that is fine. The purposes of these commentaries are to inform based on data and analysis, with the insights/conclusions flowing naturally from what the data says.

That said, even in the context of one of the toughest markets in a long while, there is a silver lining that we need to mention, and that is that times like this (tough markets, characterized by high levels of uncertainty, volatility, etc) are the ones which history suggests serves up great long-term investment opportunities.

There will be great opportunities that will arise over the coming months, our job is to make sure we identify and execute on these opportunities. We can make no guarantees in this respect, other than to assure you that this remains a key focus for the Investment team and to continue to point to the overall foundational strategic asset allocation that remains the cornerstone of our investment strategy.

On behalf of McIver Capital Management 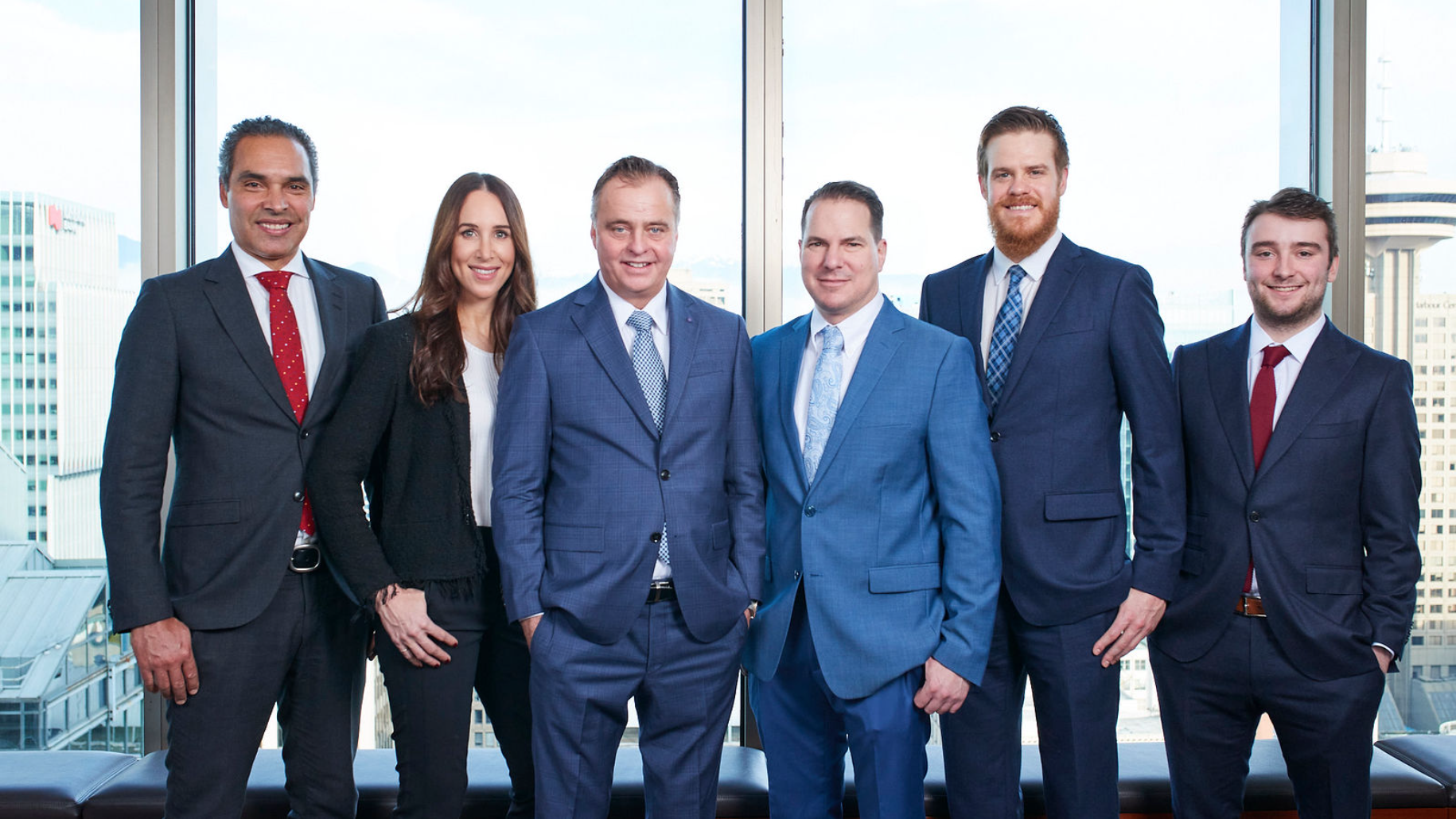 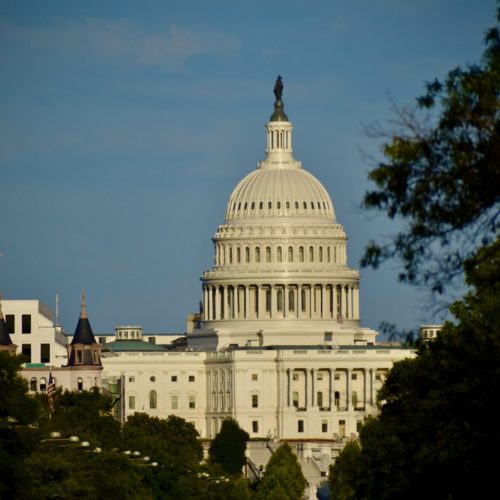 Market Summary Looking at major indices as we approach the mid-point of the year, the challenges faced by financial markets are evident. On a year-to-date basis, the S&P 500 and NASDAQ are down >20% and >30% respectively, with the bulk of the negative movement being experienced in the second quarter to date. Our commentaries to […] 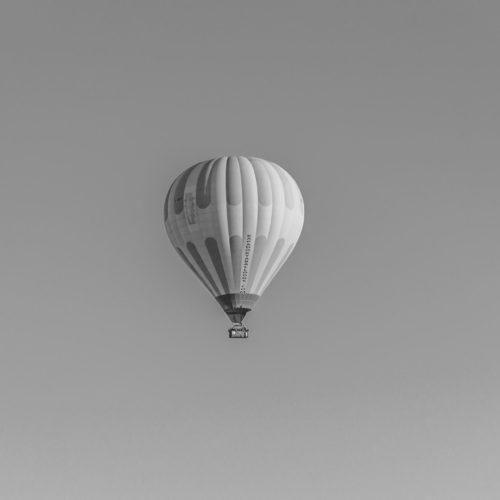 Market Summary Since the inaugural “Market Forces” piece published in January of this year, much of the focus of our commentary to date has been on our concerns over inflation, and heightened interest rate risks. This is not due to any lifelong obsession over this subject, but rather our view that this factor is a […] 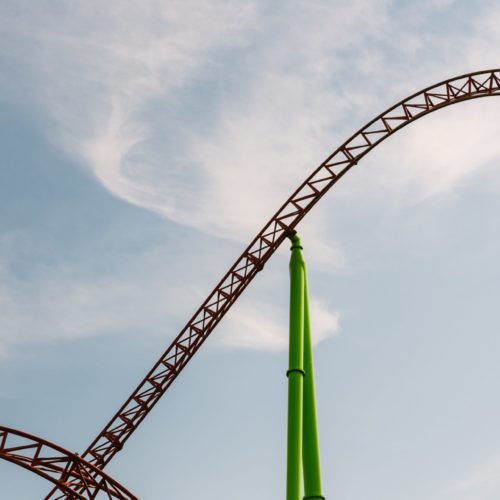 Market Summary The past week has marked the official start of the interest rate hiking cycle, with the US Federal reserve (the “Fed”) joining the Bank of Canada in raising benchmarks rates; the Fed doing so on the 16th of March following the Bank of Canada’s announcement earlier in the month. That the cycle has […]